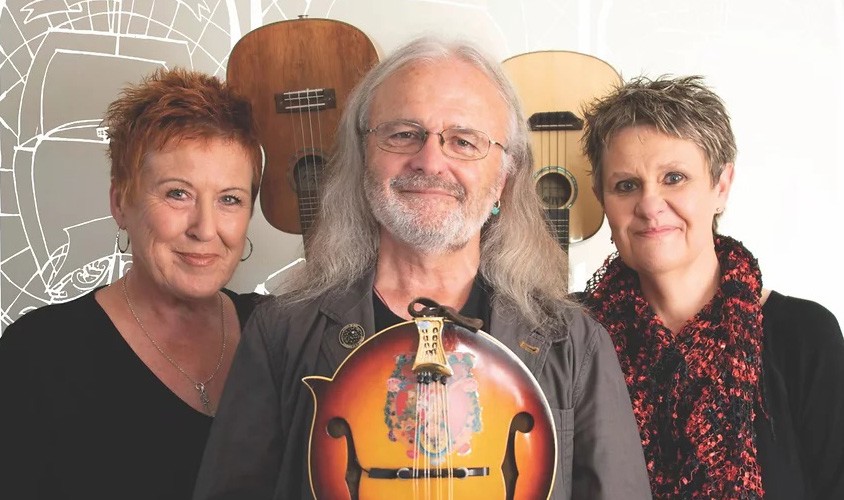 Since their first get together, to record the eponymous St Agnes Fountain album in 2001, the quartet; David Hughes, Fairport Convention's Chris Leslie and multi award winning duo Chris While and Julie Matthews, have brought musical invention and laughter to the star-dust atmosphere of the season.

In 2020, David decided to leave the band to concentrate on solo pursuits and whilst his presence will be missed, Chris, Chris and Julie will be keeping the Christmas Aggie spirit alive and touring as a trio celebrating 21 years together with a tour of the new material and reworking those old Aggie classics.

Although the albums accompany the putting up of a thousand Christmas trees throughout Britain and around the globe as their reputation reaches further afield, it is, without question, their magical live performances which have endeared them to an ever-growing audience (tickets were again being sold for this year's tour as the curtain fell last year).

Chris While and Julie Matthews

The duo have been nominated ten times in the BBC Folk Awards in the 'Best Song', 'Best Duo' and 'Best Live Act' categories and winning Best Duo in 2009. In 2019 year they celebrated 25 years - making them the longest lasting female duo in the country - with a brand new album and an extensive tour of the UK as well as numerous summer festival performances.

Chris and Julie are more powerful and popular than ever in their 29th year as a duo and remain at the very top of their game.

Chris is a multi instrumentalist, singer and songwriter from Oxfordshire. Primarily known as a member Fairport Convention, he has toured and recorded with, amongst others: Steve Ashley, the Albion Band, Jez Lowe, Ian Anderson, Whippersnapper, Alan Stivell and Feast of Fiddles. Chris has also provided music for a number of Radio Four plays and classic serials.

His fiddle playing has been heard on the TV series Heartbeat, Midsommer Murders and Billy Connolly’s World Tour of Scotland.

Chris plays: fiddle, mandolin, tenor guitar, bouzouki, ukulele, banjo, oud, whistle, Native American flute and anything else he can lay his hands on!